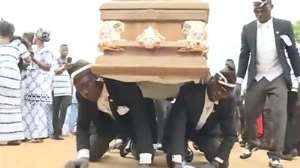 It is no doubt, that their memes and videos circulating on social media became one of the most laughed at contents in the anxiety period of the lockdown imposed on many netizens during the Covid-19 upsurge.

A group of young men from Ghana took over timelines on social media. They treated bereaved families with amazing dance moves as they convey caskets.

These pallbearers from Ghana will later gain prominence on the global terrain when social media users used their displays as comic touches to their funny videos.

Lifting up and lowering caskets, sitting on the floor, balancing the caskets on their shoulders as they wave handkerchiefs were all scenes to behold.

Some international media platforms used their videos as memes to warn individuals of impending devastations.

Two years down the line, the valuation of the pallbearers will go beyond imagination.

The Dancing Pallbearers team auctioned their meme on the NFT on April 7, 2022.

As a result, the Pallbearers were placed amongst some of the most valuable NFTs to have crossed the million-dollar mark globally.