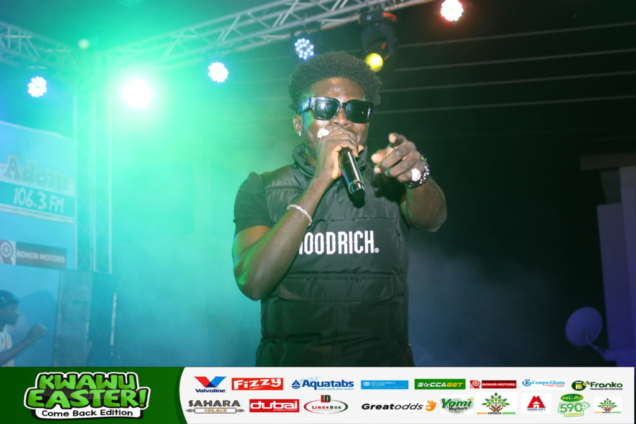 Like a thief in the night, Kuami Eugene appeared at the Adom Mega Street Bash 2022 and everyone in the crowd went gaga.

His dramatic appearance got most of the fans pulling out their phones to catch a glimpse and secure their memory of the Rockstar, who entertained the crowd at Mpraeso more than ever.

With many songs to his credit and countless hit songs to spice up the atmosphere, Kuami Eugene was truly the man for the moment.

The crowd sang songs word-for-word and though the Lynx Entertainment signee’s voice was vibrant, those of the fans were louder than him.

When the song Angela came up, it sounded more like an anthem than a song composed barely less than a decade ago.

The Rockstar performed many of his dope highlife songs such as Wish Me Well, Bunker, Fire Fire, Open Gate, Dollar on You and Ohemaa including his latest jam Te Na Fie featuring Afro Harmony.

In a nutshell, Kuami Eugene cemented his name as one of the Ghanaian music gems poised to make a legacy beyond the borders.